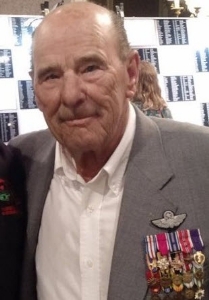 O'Dell, who was a Pontiac native and later a resident of Mount Clemens after retiring from the Air Force, had a storied military career, which included five and a half years as a prisoner of war in Vietnam and nearly 20 years at Selfridge Air National Guard Base in Harrison Township.

He was first assigned to the 94th Fighter Interceptor Squadron from June 1966 until February 1967. He was then assigned to the F-105 fighter-bomber crew training at McConnell Air Force Base in Kansas and then the 34th at Korat Air Base in Thailand in August 1967. After being released from prisoner of war status in March 1973, he returned home in April 1973 and retired from active duty in 1975.

Odell received recognition for his time served, not only with medals, but also in 2017 with a street at Selfridge now named Digger Odell Street, a roadway that connects the commissary to the marina, an honor that humbled him, as he told the Macomb Daily previously "Selfridge is home to me."

He was also inducted into the inaugural class of the Michigan Military and Veterans Hall of Honor in 2019.

After retiring from the Air Force, he served for 12 years as the civilian public affairs officer for Selfridge Air National Guard Base, retiring in 1990. While serving as public affairs officer, he was among the founders of the current Selfridge Base Community Council, which brings together business leaders and local community leaders with military personnel at the base.

Odell was organizer and co-founder of the Wertz Warrior snowmobile ride program, an annual fundraiser for Michigan Special Olympics and was also in demand as a speaker for military and veteran events.

He was the father of five children.

Wednesday 28 Oct 11am-7pm. - Viewing at Selfridge Air Museum Open to the public. Come to the Selfridge front gate and follow the signs.

Thursday 29 Oct at 5:00pm - Celebration of Life at Zuccaro Banquets and Catering on Gratiot.

We would like to attend these events as a group if possible. Please contact the VFW at 586-725-7100 between 3:00-10:00pm if you plan to attend any of these events.
Click Here to RSVP at Zuccaro's directly.

The 2nd Sunday of the month we open at 8:00 AM for Breakfast.

We should seldom be closed before these hours and could possibly be open later.